Reviewers should be revered, not reviled.

{edit 02/23/14} If you’re an author, you’ve had bad reviews or unfavorable press. It happens. What should never happen is you opening your mouth and ramming both your feet down your throat in an attempt to suppress those bad reviews. That is the essence of this post – how bullies behave, and how we should not. Sadly, it uses a real-life example to illustrate how smart people do not behave. Read it and learn. From the comments posted after the post I think you’ll see the perpetrator hasn’t learnt.{/edit}

A couple of days ago I witnessed some truly appalling behavior by an author named Ben Coulter toward a reviewer. Indeed I found it so reprehensible I could not allow it to pass with only a couple of tweets.  I placed my own work on hold in order to post about it, and considering how little time I have to write, compiling this post has been a significant sacrifice for me. I hope it is time well spent and that other independent authors might learn something from it.

Read on and make up your own mind. {When Ben Coulter’s nauseating behavior wearies you, as is surely will, you might be interested to read why we all need honest reviews.}

The images of tweets that appear below give a chronological look at parts of the conversation. Yet, as with many things, the real truth is to be found between the lines. Or, in this case, between the tweets. My thoughts on the hidden truths appear between the screenshots. Now, get ready to find out just how unpleasant and malicious some people can be. 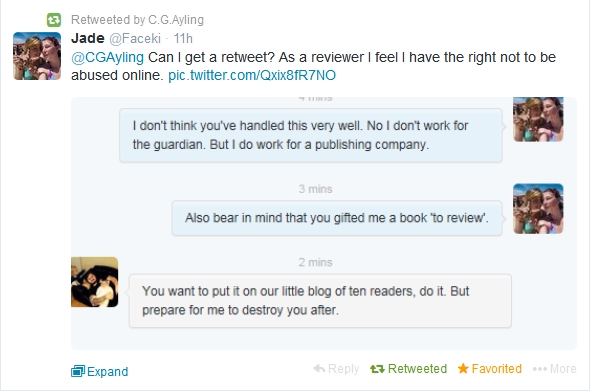 The start of it all.

Notice Jade does not mention the name of the offender. That is considerate of her and shows obvious class. I re-tweeted her post shortly after 9am Feb 13 then replied to it with the tweet below. 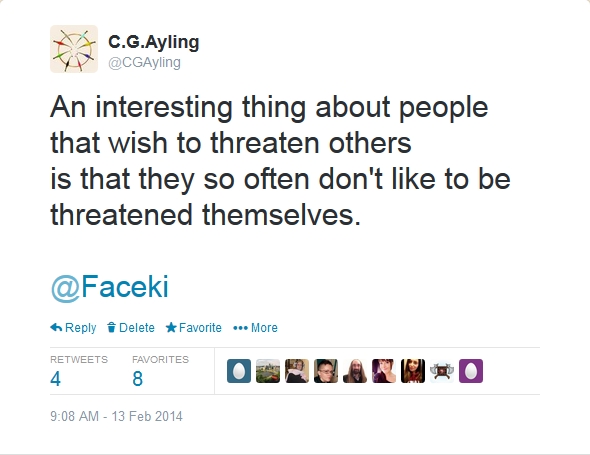 My reply to Jade in the form of an observation about the sort of bully that makes such threats.

I wonder if my words will prove prophetic… The entire day passes, until about ten hours later I when tweet again. Within 2 minutes BAM! 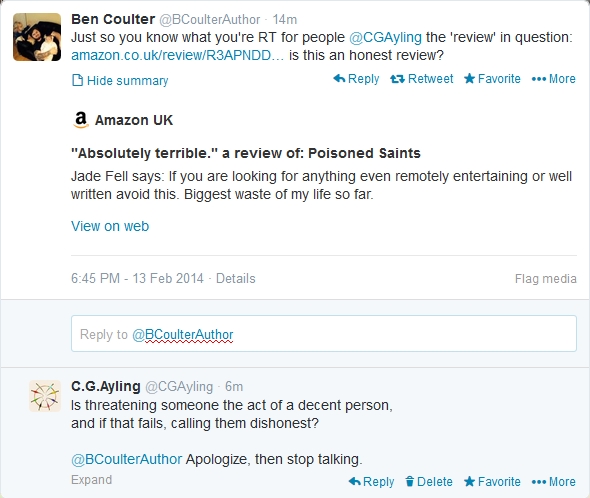 Out of the blue…

The tweet above appears in my interactions. I don’t recognize the name, but I do recognize the avatar. This Ben Coulter doesn’t follow me, and I don’t follow him. I wonder how he managed to notice me being online? I also wonder how he thinks I could have read the review “in question” since there is no link to it within anything I’ve mentioned or seen till his tweet.  Jade’s only plea was for support against a bully who threatened her, I gave her that support.
I offer Ben Coulter some impartial advise. Impartial because I don’t know him or Jade, but I do know wrong when I see it and Coulter’s threats toward Jade were and remain wrong.
The exchange below occurs. 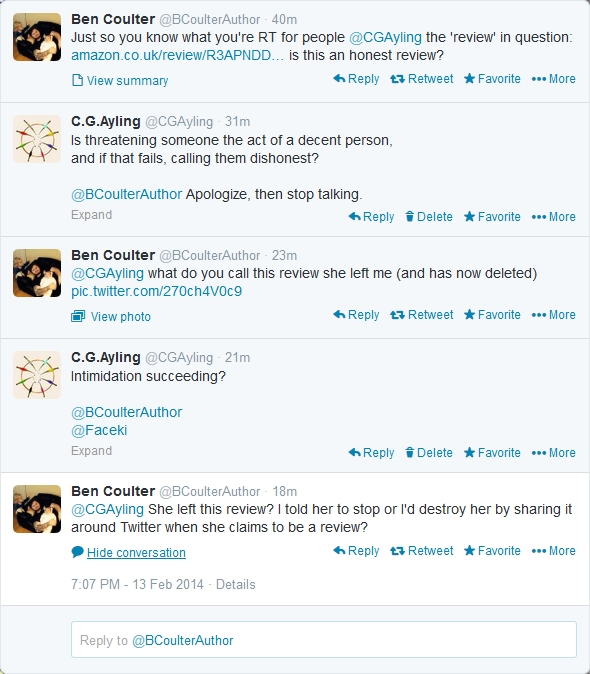 I wonder if he is proud he managed to intimidate @jade into deleting her review.

Notice the time-stamp at the bottom of the image. Also notice the adjustment of the truth in what Coulter says his threat was. The devil is in the details, and I am detail oriented. I look back at the original tweet and sure enough, that isn’t precisely how he framed his threat toward Jade.
I ignore Coulter for a couple of minutes while I catch up on what has been happening on my friends timelines.
Bam! Another out of the blue tweet. But now he’s turned his attention, and his ire, to me and posts this in a thread all by itself.

Now he’s decided to attack me?

After a minute or so contemplation whether I should feed the trolls I reply. 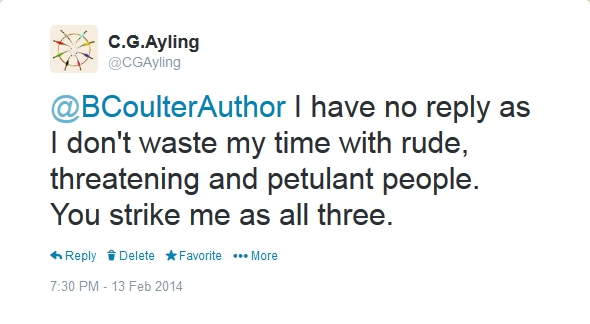 However I notice my reply hasn’t taken the form of a reply. It turns out Coulter, like a complete coward, has already deleted his inflammatory comments toward me. Unfortunately for him I keep my interactions in a separate tab of my browser. To ensure it doesn’t seem like I’m the one originating the attack I capture images of all his tweets {thus the evidence within this thread} and post the image of his attack tweet, along with his further attack. 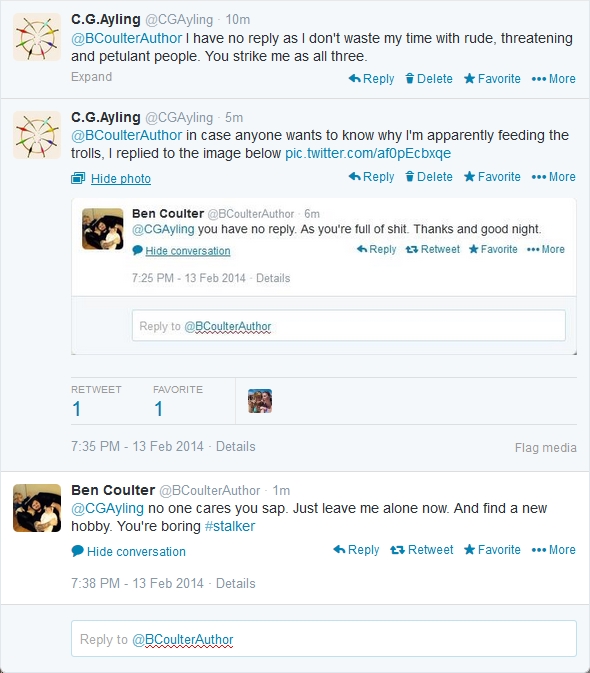 now he wants me to leave him alone? Strange, since he started this.

Immediately after, and indeed during this exchange Coulter deleted all of his tweets. However, this is the internet, and the evidence is everywhere. I took the time to report his abusive behavior to Twitter, but since I don’t hold much hope of their doing anything I decided to post the sordid little story here.

None of this should have happened.

Coulter should never have threatened Jade. Period. He should have kept his foul mouth shut and never tweeted at me.  If he’d just remained silent my RT would have scrolled away to be forgotten, and he’d have remained anonymous.  If he’d responded to my impartial advice and apologized to Jade it is quite possible he might have turned a huge negative into a positive.  He made a series of very bad choices. Him, not me. And this is the payment the piper demands.

I’m very sad to see Coulter’s nasty intimidation managed to drive Jade off Twitter, something which lent me further motivation for me to ensure the world can see this behavior for what it is.

Jade, I hope you come back.  As I encouraged you in a DM, I also hope you publish your full review of his work on Amazon as well as on your blog. Don’t pull your punches.  He certainly doesn’t pull his.

By the way, in a couple of days I’ll also be deleting my tweets that contain screen shots of this exchange.  Why?  Am I as cowardly as others who shall not remain nameless?  Possibly.  But my motivation is that the images which appear on my profile page are important to me and I don’t want trash taking space there.  After all, who likes to see a pristine beach littered with troll turd?  I know I don’t.

Reviewers should be revered, not reviled. http://t.co/E0MkRHvPK0 #review

Reviewers should be revered, not reviled. http://bit.ly/CGApRsR #review

Note that it does not include Coulter’s twitter name. Several people re-tweeted it and a couple replied to the tweet.  None mentioned Ben Coulter’s twitter handle of @BCoulterAuthor. However, he proceeded to attack me, which I never saw since I have blocked him, and then to attack them. I only realized this when they began responding to his attacks and I noticed his twitter handle in their replies to him. I opened Coulter’s {IMHO he does not deserve to be addressed with any respect} timeline and watched in horror as he spent the next couple of hours tweeting some of the nastiest personal attacks I have been unfortunate enough to see on Twitter. Per his modus-operandi Coulter deletes as he goes, probably from fear he will be exposed as the nasty, small-minded, unpleasant, and cowardly troll he is. That doesn’t work. You see I use a web browser to access Twitter and I never refresh it, which means the trash stays there until I get sick of seeing it.

The images below reveal a small part of how cowards can be big, bad, and pretend to be brave when they think no one is ever going to know.  The tweets below were some of the mildest Coulter posted. As those he attacked refused to back down he became more and more obscene, and frankly, more deranged. 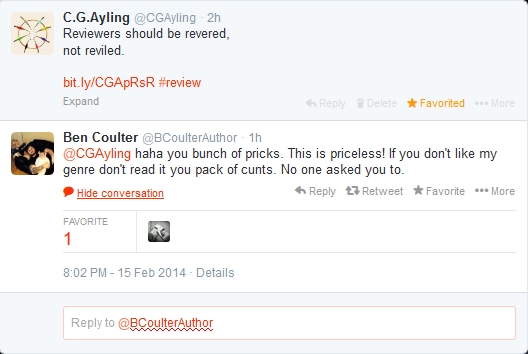 Additional abuse spewed in a public forum by one Ben Coulter. 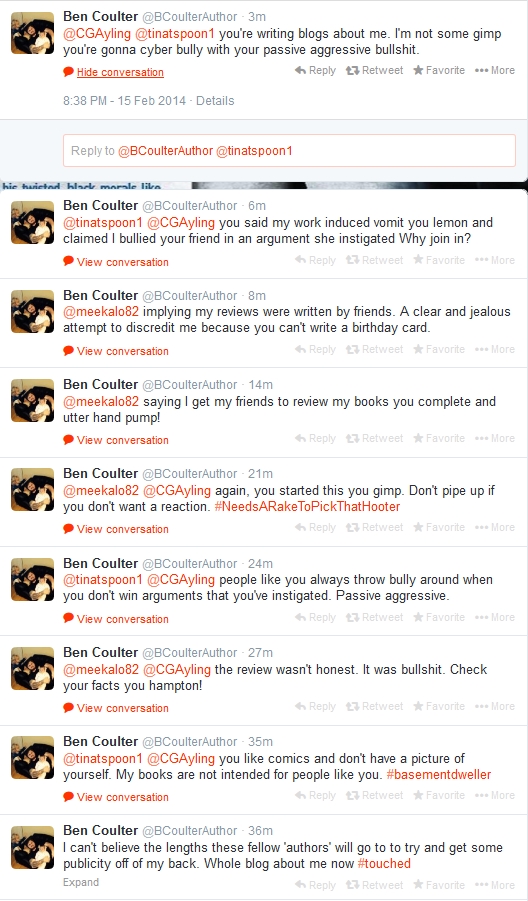 spurious attacks on anyone who dares question Ben Coulter

If you’d like to give Coulter the benefit of the doubt, and I encourage you to do so, here are the titles of the books Ben Coulter has published to date.
Poisoned Saints
Keep on Running
When The Saint Comes Marching Home: 3 (Poisoned Saints)

And if you’re in the mood for reading, here is a sample of my work. Please feel free to contrast and compare it to Coulter’s.

Not unexpectedly Coulter can’t let things simply fade away, unless he mistakes “fading away” for deleting his tweets, which he is prone to doing.  More interaction on my timeline today from one of the people he previously attacked made me open his timeline. {What can I say? Sometimes the urge to wallow of troll slime strikes the best of us.}  And what do I find?  Coulter’s usual Tweet and Delete behavior, along with an escalation into outright lies. Coulter begins slowly and escalates. As per previously, the devilish details are between the tweets.

Why would I want to get attention from Coulter’s readers? I don’t write in the same genre as him, therefore his readers are very unlikely to have any interest in my work.  But, like all good lies, it almost sounds plausible.  Let’s move on.

Ben Coulter moves from a subtle lie to a blatant one.

It didn’t take Coulter long to escalate from subtle mistruths to full-on frontal lies, 8 minutes by the time stamps. Coulter’s tweet is an outright lie. It is not open to miss-interpretation, it is a blatant lie. The only times I have ever addressed Coulter are shown as images in this blog post. To state that I, “the blogger and the reviewer woman had been attacking for a few days“, is an out and out lie.

Unlike our cowardly troll from hell, I don’t Tweet attacks and frantically delete them minutes after in order to hide behavior that is abhorrent and utterly reprehensible.

My timeline shows everything, and it really only makes sense if you read it that way. You see, most of my Tweets are in response to something else.  In fact, this blog post is in response to “Author” Ben Coulter attacking someone.

Yes, I occasionally delete my tweets. For two reasons, first to fix typos, and second to clear images off my Twitter profile page. I did that with two of the tweets on this blog post that had images in them that detract from my profile page.  But they are here, and here they will stay.

Why am I posting about this?

Why am I bothering to spend my limited time posting about this unpleasant, lying troll named Ben Coulter?  Because too much of the world is willing to sit silent in the face of brutality, threats, and all sorts of morally reprehensible behavior.  Coulter has committed each of those atrocities.  Not against me, but against a reviewer who dared to tell him what she thought about his books.

The above paragraph is not an opinion stated as a fact.  It is fact stated clearly through the images of Coulter’s words, captured before he took the coward’s way out and attempted to delete the evidence of his foul behavior.

Our world has turned into the cesspool it is because people stay silent in the face of blatant bullshit.  As Edmund Burke said, “The only thing necessary for the triumph of evil is for good men to do nothing.”

Before I lay this post to rest I would like to say something that may not be obvious. I have never read any of Coulter’s work.  Not the samples on Amazon, nor anything else of his except his Twitter timeline.  You see this post has absolutely nothing to do with Author Ben Coulter’s ability to write novels that sell. All this post is about, is Coulter’s attempt to crush someone.  In his own, undeniable words “prepare for me to destroy you“. That, said to someone who dared to tell him they didn’t like his work. Sadly it seems he managed to drive Jade @Faceki off Twitter. I wonder if Jade is Coulter’s first victim, and whether she will be his last?

You may choose to remain silent and “do nothing” in the face of evil, but I will not.

8 Responses to Reviewers should be revered, not reviled.