So many people are such moral cowards they find themselves unable to question things that are obviously wrong.

Could this trait be one of the poor outcomes of that terrible policy known as “political correctness”? Do we fear speaking the truth as we see it, because we’re afraid we might offend someone who sees truth a different way? Are we so unsure of our own beliefs we don’t dare listen to someone who believes differently than us? When did we become so proficient at self-censorship?

And when the topic turns to religion, political correctness goes rampant. Is the topic of religion repulsive? Perhaps it is to you, but so what? Just because you’re uncomfortable saying what you truly believe, the rest of humanity must shut the hell up? Get over yourself. I don’t care if talking about something that affects substantially more than half of humanity makes you nervous – this is something humanity needs to talk about.

In ages past I think political correctness had other names. One of those names is censorship, which is something every thinking person abhors. Censorship is never good. Why? Because it actively prevents the dissemination of information. Censorship does nothing to protect people, and it is never enacted with that goal in mind. Censorship is enacted and enforced to protect special interests. Censorship is sold to an unthinking populace through the use of emotive, distracting words like “safety”, “national security”, “pornography”, and “decency”. When censorship began failing, political correctness made an appearance.

We’re now subtly encouraged to censor ourselves, with all the same lies as the motivators to our silence. That is precisely what political correctness is, our silence on troubling topics.  No thanks.

Another past name for political correctness may well have been blasphemy. And thus begins the real topic of this post.

Throughout the ages the word blasphemy has been one of the most effective tools of censorship in existence. Sadly, this remains true today. The word blasphemy holds enormous power over people. Virtually nobody is willing to be labeled a blasphemer. It doesn’t matter who you are, it doesn’t matter whether you’re devoutly religious or virulently atheist – you don’t even want to think of yourself of as a blasphemer.

Scared people are easy to control. How does it feel to realize you’re being controlled through your fears? For me, it doesn’t feel good at all. Indeed, it feels so badly wrong that I’m spending my very precious personal time writing about it.

Since things on the Internet are constantly in flux, the image below is of the page as it existed when I wrote this post. 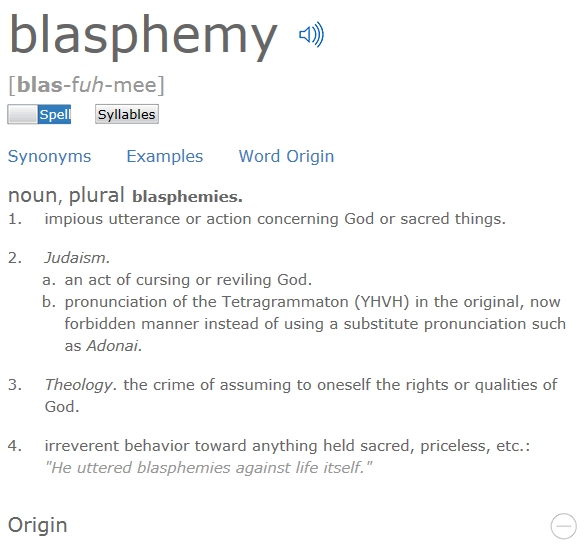 The very definition of the word blasphemy reveals just how ridiculous the concept is. Allow me to examine it from another view of true. Actually, since I’m a active proponent of Freedom of Speech as a fundamental human right, I don’t need your permission to say what I think, so I’m not asking for it. If you don’t want to risk reading something that might just possibly contradict something you hold so sacred you dare not question it, then leave now. Freedom of Speech does not include a clause that requires other people to listen.

The definition could stop there. This clause is such an effective, catch-all, gag order that there is pretty much nothing more that needs saying. Except, of course, that there is a lot more that requires addressing.

For example, the implicit monotheistic assumption that God is singular. How offensive is that assumption to those who choose to believe in multiple deities? It is so offensive it should be labeled blasphemous. It just isn’t politically correct at all! Strike it from record!

The first clause’s definition then moves on from the sublime to the ridiculous by mentioning, “or sacred things.” Seriously? Is the Sun not sacred? How about the wind, the rain, the sky, the earth upon which we tread, or the heavens overhead? I’m not allowed to make impious utterances about anything? Give me a break already. Actually don’t bother, since you hold no authority over me I don’t need your permission and I’ll just take one. {But hold that thought… you know, the thought about who holds authority over you.}

First, I must say I find it extremely offensive that one of the most numerically insignificant religions in the world gets such prominent placement in a dictionary.  Such prominent placement that far more popular religions are not even mentioned. Look up the numbers, Judaism accounts for less than a quarter of a single percentage point of the entire world’s population.

Oh, I’m sorry, is my mentioning a statistical fact that reveals how something insignificant is given completely disproportionate weight blasphemous? Too bad. It is a fact. Which makes it the truth, and how could the truth possibly be blasphemous? {Actually, I don’t believe in the concept of truth, I believe in the concept of perceptive truth. More about that elsewhere on my blog.}

The sub-text of clause b further highlights just how ridiculous the concept of blasphemy is. If dictionary.com is to be believed, and I don’t see any reason to doubt it, then it is actually blasphemous to pronounce the Tetragrammaton, which is the Hebrew word for God, the way it was originally written in the Hebrew holy texts. I’m trying hard to wrap my mind around this, but it is so transparently stupid I’m actually having difficulty comprehending it.  What this apparently means is that somewhere, sometime in the very distant past, somebody decided that something someone else had written was so holy it could no longer be said. So this person, whoever they were, apparently has greater authority over a religious holy text, held by Judaism to be the holy words of their deity, than their deity himself?  Wow. Just, wow.

Clause 3. “Theology. the crime of assuming to oneself the rights or qualities of God.”

Since when is thought a crime? No, I’m not saying I think I have the rights or qualities of god, singular, I don’t. But I absolutely refuse to deny anyone, anywhere the right to think as they choose. If they choose to believe they are a god, or the only god, that is their business, not mine. You will note that in this section the words that are mine do not capitalize the word god.

I want you to know why I don’t.

It is because I just don’t know. I don’t know if there are gods, or if there is one overall god. I don’t really even know what a god is. From all the writings on that subject I do know what god is supposed to be, but I have a fundamental problem with all of those writings. My fundamental problem with them all, is that they are all written by men. No man is a god. Therefore since I don’t know who or what god is, of if god is singular or plural, or masculine or feminine, it seems impious of me to ascribe the word a capital letter that indicates reverence. What if the god to whom I ascribe that reverence turns out to be the wrong one, or what if they {plural}, turn out to not exist at all? So capitalizing the word  seems irreverent, which I am, so I don’t. Simple.

I said it before, but I have to say it again. From the sublime to the ridiculous. Now I’m not allowed to be irreverent toward something held to be priceless??? Would my describing the Mona Lisa as “just another portrait” be blasphemy?

A three letter phrase commonly used in the texting internet era that begins with “o” and ends with “g” pops to mind. But I won’t use it. Why? Because, strangely enough, after all I’ve already written, I think that little acronym is offensive, crass, and rude.

Why do I think that three letter acronym is offensive, crass, and rude? Because it implicitly ascribes special value to our personal deity. They are ours, and therefore they are special. I firmly believe in equality, which means that our deity cannot be of greater worth than that of anyone else.  I don’t care if your religious text proclaims it is the only “true” religious text, which most religious texts seem prone to doing. It isn’t. It is just another of many religious texts.

Because blasphemy is evil, but it isn’t evil in the way so many think. It is the proclamation that something is blasphemous which is evil, not the utterance itself. Why? Because such proclamations are nothing but weapons in the arsenal of those people who strive to control the way you think. Which is all they are. People. People, just like you and me. Who gives them authority to chain our thoughts so thoroughly we dare not even think?  It certainly isn’t a deity, oh no.  Indeed, if anyone gives them that authority, it is you, and you are free to take that authority away.

The next time you listen to a cleric of any religion, bear this thought in mind. They were ordained by another human, and no human is a deity.

I also wrote this post to show my reverence for the staff of the Charlie Hebdo satirical magazine. If you are financially able, I encourage you to support them with a donation. Let free people everywhere show those who would quell free thinking an explicit message.  A message that we won’t be cowed into silence by violent extremist terrorists – regardless of what brutal deity supposedly demands it. I hold those murdered staff members in far higher esteem than the murderous villains who attacked them.

Just to be clear… I consider every person who condones or promotes murder and oppression in any name to be an evil, inexcusable, waste of human skin who has no place in our world. Sadly, that definition encompasses an enormous number of Muslims, who actually seem to think people who abandon their faith should be executed. {Go ahead and verify that statement for yourself.}

Here is a heads up. You actually think someone should be murdered for a change of heart? A change of heart doesn’t make them evil. The evil one is you, for ever considering murder as a punishment for freedom of thought.

If you can’t question your clerics, then it is past time you questioned your faith.

If you hold Freedom of Speech, along with the requisite Freedom of Thought that precedes it in high esteem, then throw political correctness out into the stinking trash where it belongs. And while you’re at it throw out archaic, irrelevant words that curtail your freedom to think. One of those words, is blasphemy.

{P.S. What do I really believe? I talk about truth, and I do so because truth really matters to me. But truth doesn’t define what I believe, what I believe is defined by truth as I perceive it. But that doesn’t answer the question, does it? It doesn’t say whether I’m a Theist, or an Atheist. What do I really believe? I’ll post more about that another time.}

One Response to On Blasphemy.