Lest We Forget, ICU.

This post covers the surgery to debulk the tumor infringing on my Pituitary gland and the first week thereafter, which I spent in the Intensive Care Unit at OhioHealth Riverside Methodist Hospital in Columbus, Ohio.  If you haven’t read the first installment of this post I recommend you do so before proceeding.

Tuesday, February the 7th, the day of my surgery arrived.  My wife, Suzanne, and I woke up early and set off for the hospital.  During the drive she asked if I was worried about any aspect of the surgery.  After a moment’s stoic, manly silence I gathered my courage and admitted that the prospect of memory loss concerned me.  {Why are we men so stupid and stubborn we think it is better to hide our fears from our loved ones?}  She reassured me it was unlikely and carried on driving.

I sat silently and tried to relax while my mind played havoc with my emotions.  Yes, I am one of the stupid, stubborn men I just mentioned.  The reality is that a fear of memory loss more than concerned me, it terrified me.  Why?  Because over thirty years previously I suffered a Cavernous Sinus Thrombosis that saw me hospitalized for three months.  I recovered remarkably well and returned to normal… except for one thing.  It took me a long time to realize, but virtually all my childhood memories were simply no longer there.  It was like I jumped straight from age five to age sixteen.  Occasionally a memory would surface, but most of my childhood memories were lost.  Extrapolating that time to the present left me fearful of what I might lose this time around.  What if I didn’t recognize my children, or my wife, or my friends, or what I’d done and who I was?  Instead of conveying these fears to Suzanne I kept silent and pretended I was fine.  Yes, I am a stupid, stubborn man.

We arrived at the hospital around 5:30am.  Suzanne dropped me at the main entrance, allegedly to save me the walk from the parking garage but I’m sure it was so she could have a cigarette to help calm her own nerves.  Major surgery tends to make people nervous, with good reason.  I walked in, identified myself at the desk I’d been told to, and was escorted upstairs into the secured surgical area, where I was instructed to change into that unflattering hospital garb we know and love.  After doing so I sent a text message to Suzanne explaining where I was and how to get to me.

And that is where everything went blank.  Lest we forget… more days of my life, forgotten.

Please note that most of the remainder of this post are not my recollections, they are pieced together from what my wife and children have told me about those days, how they felt, and what they did during them.  In the eloquent words of my favorite youngest daughter, Julia, “I was so worried I bombed out in a psych exam.”

Bear with me as I relate a particularly difficult week of my life, mostly from how my family told me it went.

Dannielle, my favorite middle daughter, joined my wife to sit and wait for surgery to complete.  They comforted each other as the estimated two-hour surgery dragged on to three hours.  They watched as names on the In-Surgery roster went up, then came down as their surgeries were completed.  My name didn’t move.  Four hours passed with no word, then five.  I imagine my wife comforted Dannielle, who is quite sensitive, however this is just what I imagine… the truth is likely to be that they comforted each other equally.

Over five hours after I went into surgery, it was finally over.  Dr. Brett came out and explained complications had unavoidably extended the procedure.  The tumor was pressing on the frontal lobes of my brain, my hypothalamus, my pituitary gland, and my optic nerves.  Apart from the direct impact of the tumor itself, the surgeons had been unable to place a lumbar drain – this resulted in spinal fluid escaping through the wound into my nasal cavity by which the endoscope had been inserted and operated.  Post-surgery they sent me to the Intensive Care Unit, where staff would keep a close watch on my condition.  Hope was expressed that the wound would heal and seal itself.  At time hope pays dividends, at others it does not.

Wednesday, the day after surgery I was exhibiting signs of Diabetes Insipidus and dumped alarming amounts of fluid via a catheter.  {I suspect urinary catheters are normal practice after this type of surgery as they allow the patient to rest and hospital staff to measure and watch for DI.}  Suzanne and Dannielle came to visit me and stayed most of the day.  They were given a huge, clear plastic one liter capacity hospital mug, which I still have, and were told to encourage me to drink, which I refused to do.  In the words of my wife “The day was an emotional roller-coaster as we saw bits of you, then saw you crash.”  I was acting like a child, clamping my mouth shut and refusing food and drink.

To get me to drink at least some fluids Dannielle took to sucking up a straw full of water, which she’d leak into the corner of my mouth and I’d then swallow.  My wife told me this after I left hospital, Dannielle confirmed it when I asked her.  Dannielle said she’d managed to get me to drink about half the mug of water.

At the end of the day Suzanne and Dannielle left to attend to the duties of life that wait for nobody, the ill included.  The nursing staff thought my copious urine production was a result of my drinking too much.  Dannielle had managed to feed me about 500ml of water, but they thought I’d drunk several liters so they cut off my Intravenous fluids.  The lack of hydration caused my sodium levels to drop and brought on Sinus Tachycardia.  As if this wasn’t enough for the ICU staff to worry about, the spinal fluid that had continued to leak into my sinus cavities started pouring from my nose.

Thursday, Suzanne and Dannielle arrived early to visit again.  Suzanne, who had been my nurse when I was in hospital for the Cavernous Sinus Thrombosis {every cloud does have a silver lining}, discussed overnight events with the staff.  They immediately placed back me on IV Fluids once they realized I wasn’t actually drinking.

To address to the continued leaking of spinal fluid they sent me to Interventional Radiology to have a spinal drain installed.  Thursday passed with me out cold.

Friday arrived, so did Suzanne and Dannielle.  They sat bedside as a reasonably normal day unfolded.  From their perspective I seemed to be myself again.  Throughout the day a constant stream of nurses and doctors visited to discuss and examine my spinal drain, which is apparently seldom used or seen nowadays. {Please note this as it will be revisited in the next post.}

Saturday came.  Per Suzanne, things were going reasonably well, however she had a premonition something was not right but shrugged it off and left for the night.   Strange how often those feelings we’re so eager to shrug off prove accurate…

Saturday night I completely lost my memory, didn’t know who or where I was, became hostile, and proceeded to rip out my IV, my catheter, and my spinal drain.  A psychology consult was requested, the doctor on duty diagnosed me with ICU Psychosis and administered Haldol.  Hospital security staff forcibly subdued me, after which I was sent down to Radiology to have a CAT scan for a suspected brain bleed.  Multiple CAT scans were performed, apparently the Radiologist thought he had found a bleed.  My Neurosurgeon did not agree.

On Sunday I was still subdued and suffering from total memory loss.  Blood tests showed my Cortisol levels were dangerously low, so I was given a massive dose of Cortisol. 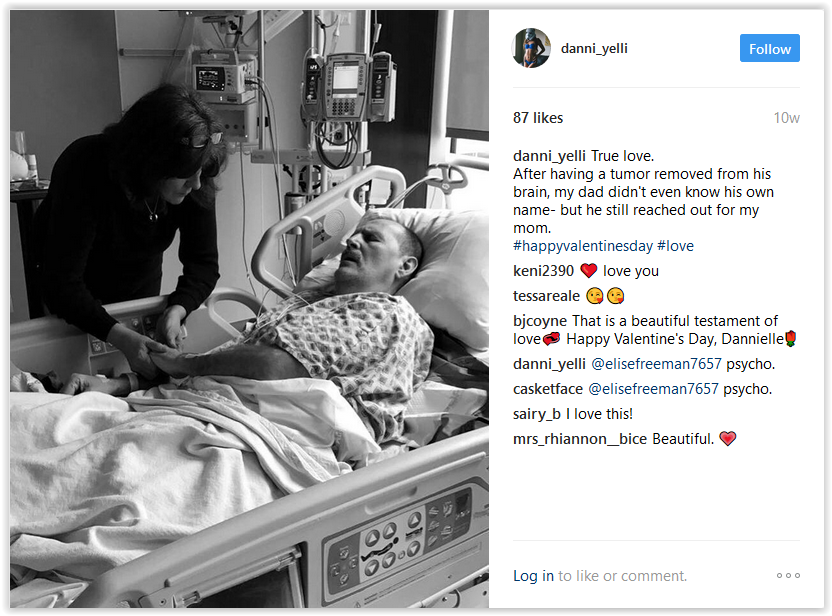 By Monday I was returning to myself and starting to recognize my wife and daughter.  Or so I’ve been told, in my own memory that particular Monday simply doesn’t exist.

Tuesday, from the perspective of Suzanne and Dannielle, was a reasonably normal day in the ICU.

By the end of Wednesday I was actually aware once more and had been approved for transfer to a step-down ward, where I’d spend another week struggling to recover.

For those of you who’ve seen memory loss depicted on television serials, it isn’t like that at all.  You see, memory loss isn’t as precise as a surgeon’s scalpel – it doesn’t neatly excise specific bits.  Memory loss is administered with a heavy, blunt instrument that does collateral damage to adjoining events and time to the where and when it strikes.  Memory loss doesn’t just conk you on the head, then let you sit up in bed, bemused, but regal as ever while you talk politely to your admirers, and magically regain the memory you’ve lost through a series of black and white flashbacks.

Memory loss doesn’t work like that at all, at least it did not for me.

From the account above you’ll note that Saturday night, four days after my surgery, was the night I suffered from a total memory loss.  It socked me a real sucker-punch that stole everything from before I went into surgery until about a week afterward.  Those days aren’t gradually returning.  It is now three months later and they remain a blank, no matter how long and hard I struggle to recall them.  Apart from a couple of strange dream-like fragments totaling a few minutes of real time, those days are gone.  I don’t know why those fragments were spared, but I’m glad they were, you see they restore some faith in my own sanity.

Memory-wise, it is as if those missing days didn’t even happen.  Only they did.

And the worst was yet to come…

{P.S. I am particularly grateful to my wife Suzanne, and my daughters Tamryn and Dannielle for putting their normal lives on the back-burner to tend me, even though I didn’t know who they were or why they were there.  To my son Gareth, and my youngest daughter Julia, whom I believe my wife protected by keeping from my bedside – I lost you for days, but I am so glad to have you back.}

10 Responses to Lest We Forget, ICU.